I love bananas for breakfast, it’s what I ate for breakfast this morning.  Plantains on the other hand are not for breakfast, but equally (if not more delicious).  I am not a food scientist a la Alton Brown but I did a little research so I’ll pass it on so we’ll all know how bananas and plantains are different fruits.

Plantains are in a green, thick skin, they can’t be eaten raw and are starchy and used as a vegetable, whereas bananas, well you know, yellow, think skin, sweet, good in cereal!
When we had our Latin fiesta night in addition to the watermelon, salsa and Mexican inspired s’mores we also served tostones, or plantain fritters.

Tostones Ingredients:
3 Large Plantains (party of 8)
Vegetable Oil of some variety, we used Canola
Kosher Salt
Open the tostones, you’ll probably need a knife as they don’t break open as easily as a banana.  Cut slices that are about 1 inch long.

Put oil in a large pan (about an 1/3 inch high) over heat over a medium/high flame.  When the oil is hot enough, not burning or bubbling, but hot enough to react if you flicked some water from your finger tips into the oil, place plantains in slice side down.
Cook plantains for about 2  minutes on each side. 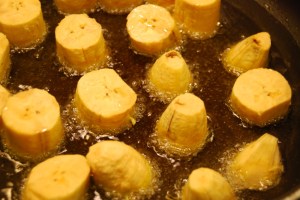 This is a sensitive time, you’ll want to keep an eye out so you can get a nice rich caramel color on the fried side.  Too light and thetostones will be too starchy, too dark, they might taste like burned sugar. 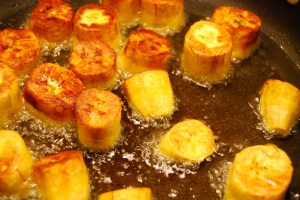 Set up all of the fried tostones on layers of paper towel to absorb any of the oil that is being released, just like latkes, onion rings, or anything fried you’ll want to mop up the extra oil so you can get right to the flavors of the food.  Stop!  Do not discard the extra oil!

Time to smash!  I suppose if you had kids, which I don’t, this could be a fun thing for them to do with supervision. (This was also a great thing for Mark to do, that’s him!)  Set up a cutting board and grab a can from the cupboard.  Smash!  Smashing the plantains to about a 1/2 inch will be perfect.

The smashed plantains go back in the oil for about 20-30 seconds on each side just to crisp up the sides, and then back on new paper towels.

This is delicious now, and ready to eat.  But to maximize that salty-sweet combination that is so hard to beat grab that Kosher salt and lightly sprinkle over the tostones, then just try not to eat all of them!