I’ve  been following along with the runway shows of NYFW Fall 2014.  The colors are gorgeous, the textures are sublime and while I don’t want to skip past spring and summer (at all!) it does promise something fashionable to look forward to in the months to come.

Here are just a few of my favorites so far, but check out all of them in my Pinterest board in real time! 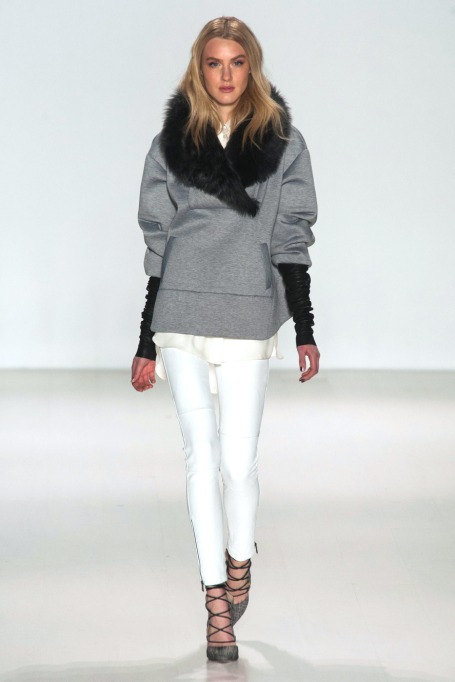 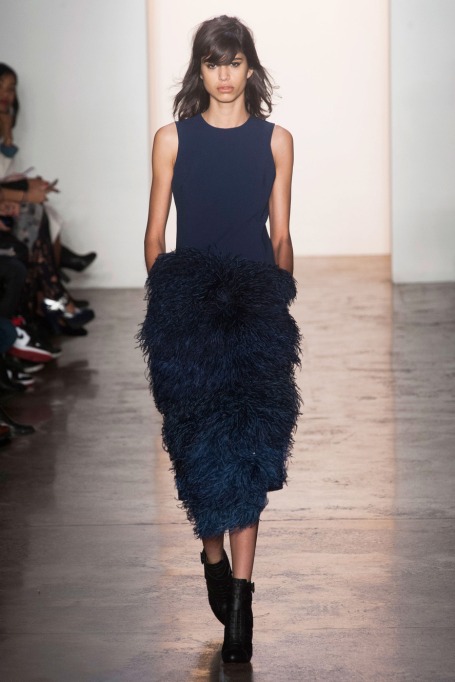 How to Wear the Trend: Must Have Pieces for Fall 2012

I’ve figured out how to master the runway color trends in real life, now it’s time to figure out how to wear the must have trends off the runway and on the sidewalks.

Bear Arms: Several designers showed outerwear looks that at their base were streamlined and sophisticated but a look to the right or the left revealed sleeves in furs and pelts. 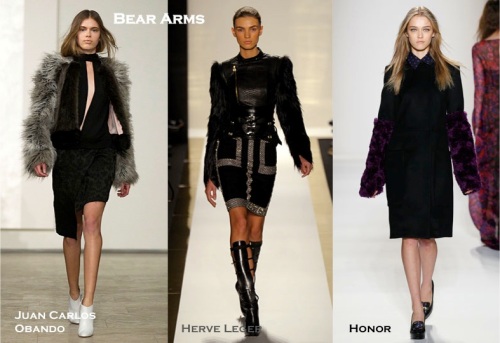 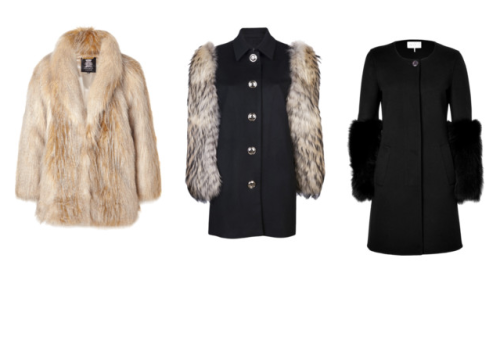 Over the Top Toppers:  In velvets and satin, featuring ornate beading, textures or embroidery these coats aren’t ideal for the next blizzard but they make a beautiful statement. 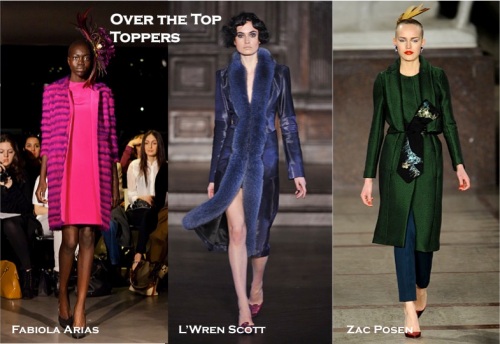 Over the Top Toppers, the Real Way:

On Top:Several designers showed models in hats.  Some were a part of the sartorial statement (Jason Wu), others were a outlandish statement all their own.

Urban Prairie Girl:  There is the city girl, you know her in leather and black.  And now there is the urban prairie girl; she’s wearing layers, leather, sheepskin, hats, scarves, neutral tones.

Military Precision: As a throwback to the 40’s there were quite a few looks that were expertly tailored and reminiscent of the 1940’s military aesthetic.  In slim silhouettes, natty tweeds, and even the bomber jacket were on the runway.

She’s a Groovy Kind of Girl:  Kicky mini dresses and dramatic maxi dresses were the base for corduroys, suede, floral prints, and knit textures.

What pieces are you excited for for Fall?  Are there styles that you’re falling for already?

Posted in fashion week, Her Closet

Trendspotting: Must Have Pieces at NYFW Fall 2012

Hello friends, I am back and ready to continue trend tracking the fall runways from NYFW.  So far we’ve covered color (I’m sure by now you’re loving the orange, teal and berry) and now we move on to the must have pieces that showed up again and again (or at least 3 times) on the runways.

Bear Arms:This isn’t a subtle look, in fact it’s rather fierce and aggressive.  Several designers showed outerwear looks that at their base were streamlined and sophisticated but a look to the right or the left revealed sleeves in furs and pelts.

Over the Top Toppers:Another outerwear look, which might be easier to pull off, is the idea of resplendent and sometimes over the top coats.  In velvets and satin, featuring ornate beading, textures or embroidery these coats aren’t ideal for the next blizzard but they make a beautiful statement.

On Top:Several designers showed models in hats.  Some were a part of the sartorial statement (Jason Wu), others were a outlandish statement all their own.  The use of hats on the runway is a nice way to see fashion imitating life, see Kate Middleton.

Urban Prairie Girl:There is the city girl, you know her in leather and black.  And now there is the urban prairie girl; she’s wearing layers, leather, sheepskin, hats, scarves, neutral tones.  Frankly, she looks like an extra from The Road.

Military Precision:As a throwback to the 40’s there were quite a few looks that were expertly tailored and reminiscent of the 1940’s military aesthetic.  In slim silhouettes, natty tweeds, and even the bomber jacket were on the runway.

She’s a Groovy Kind of Girl:I loved this look, and it was great to see the 1970’s style on the fall runways after it had been stocking spring shelves for years.  Kicky mini dresses and dramatic maxi dresses were the base for corduroys, suede, floral prints, and knit textures.

What pieces are you excited for for Fall?  Are there styles that you’re falling for already?

Posted in fashion week, Her Closet

One of my favorite trends off of the Fall 2011 Runways was the boldness of color in every jewel tone.

The applications have been endless:  color blocking, monochromatic,  and color family pairings.

So, how do you get this bright and still very sophisticated look? Pick classic and simple shapes, pick bold (and skin tone flattering) colors, take some risks and be confident. 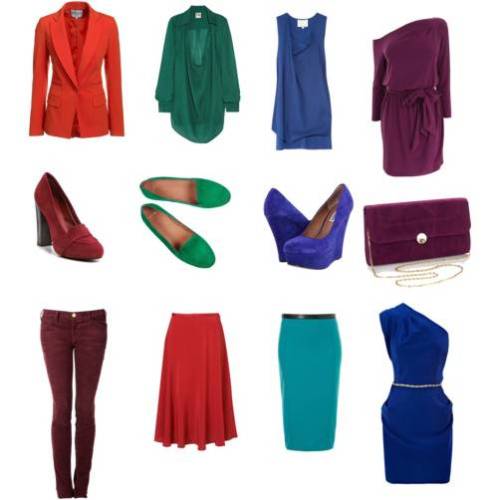 So, now that I have reviewed my favorite Fall 2011 trends, which is your favorite?

A classic trend in evening wear, and one that was a star for me on the Fall 2011 runways was the abundance of muted, but still glistening gold.  In a variety of textures the gold that walked the runway was more tarnished, aged, and organic without losing any of it’s sparkle.

An obvious choice for evening wear, these gold pieces are glamorous and include an additional element of sophistication so as to never be compared with your Bat Mitzvah dress.

Here are some ways to wear gold that says fabulous, not flash.

Today is the first day after Labor Day, in otherwise known as the day after the last day it is socially appropriate to wear white.

I scoff, balk and laugh at that rule.  White is a neutral color, and in shades of cream, vanilla, and ivory it an essential for winter.  Fall/Winter White speaks to the dreamy life that Michael Kors has created for the luxe urbanite enjoying city living, and that Ralph Lauren has perpetuated for the girl who dreams of a mountain home and a ride on her own horse.

Do not be afraid of white for fall.  Here are some great ways to use white as a neutral all year round.

White is All Right, all year long

Tips to wearing white in winter:

I have always loved the art deco aesthetic.  Growing up in South Florida it wasn’t uncommon to take a day trip to South Beach and see the old art deco hotels (Colony, Raleigh, National) and go to the Art Deco Show on Ocean Drive.  Similarly I have had the opportunity to play dress up in, and admire the jewelry of my nanny and nana who have collected in this style for many years.  So, it was quite a delight to see it on the Fall 2011 Runways.

My favorites from the runway:

What is lovely about the art deco style is that there is simplicity in the silhouette but not without making a statement.  Even a simple black dress can make a bold statement with this kind of execution.

So, lucky for us (me!) J.Crew has done a fall collection of art deco inspired jewelry with Lulu Frost, a jewelry brand founded in 2004 by Lisa Salzer.  Here are some of my favorites for your jewelry box.

And should you wish to try the art deco style, here are some favorites for your wardrobe:

More trends coming soon!  Are there trends you want to see visualized?  Do tell in the comments!

It’s time to get ourselves ready, and by ourselves I mean our closets, for fall.  I have already made a visual wish list for Julie, and now I am working through my favorites themes from Fall Fashion Week 2011.

The pervasive theme for fall was bold and highly saturated color, however, we would be kidding ourselves to think that fashion would abandon the non-color, color black.

My favorites from the runway:

On first glance, they have nothing in common beyond their color.  But look further… There is movement, exoticism, layering, something special.  This is not your basic black. This is high-powered, glamorous, strong, fierce and sophisticated.

And, I’d like to think, that when paired together well, these pieces exude that same kind of magic.

More color coming soon!  Are there trends you want to see visualized?  Do tell in the comments!

The other day I had the following conversation with my sister, Julie:

Julie: Replace my Chinese Laundry brown boots with boots that I enjoy with jeans, leggings and skirts b/c those don’t go with skirts and I need to be able to wear boots to work, colored denim – in a red and maybe an awesome blue or mustard or something – no jackets, I’m prob good on scarves, ooh I kind of want a suede flat – like a boat shoe or loafer, obviously more maxi dresses and like 3-4 awesome sweaters in bright fall colors – purple, green, etc – and that’s it for now

Me: I particularly like how you say, “enjoy” with skirts

What I like about this look: It is a mix of a lot of things, with a focus on color.  Julie often has a bolder vibe than I do, but walks the fine line between DC conservative and bohemia.

What do you think, Jules?

It Only Happens Twice a Year

That’s right, Nordstrom is having there semi-annual sale, we have talked about this phenomenon before, but time has gone by so quickly I didn’t realize we were back to sale time.  So, really it turns out that my night-time iPhone searches has paid off for both of us.

Last time I pointed out all of the things I wanted, which looking back may have been selfish… Although, it did made sense because it’s my blog, and I don’t really know what you, as a reader, need at Nordstrom.  This time I will point out the best bets, deals, and a few favorites.  Besides, it’s almost the holidays you can treat yourself early!
Let’s venture into the shoe department: of all of the premium department stores (Nordstrom, Bloomingdale’s, Saks 5th Avenue, Neiman Marcus) I consistently think that Nordstrom has the best shoe department.  (No, they don’t have shoes with red soles, but honestly not many people can afford shoes with red soles.)

The Hunter boots are a great investment and one you’ll appreciate in fall and spring, and something I typically cannot justify paying retail for.  The Puma sneakers I own, and they’re great – seriously, easy wear.  The Via Spiga Boots are so classic that if you can keep them in good shape you can wear them forever, and the Stuart Weitzman style are a good deal on a hot boot, so that’s always hard to turn down.  The Pelle Moda and Charles David are good steals and good pair to pick up because you never know when you’ll need a statement shoe and it’s good to have options on hand.
Now that your feet are fashionably dressed, here are some shopping tips from me to you, with love: 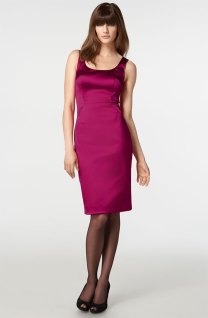 It’s called the Jackie, I featured it for the Madonna: Dress Like an Icon post, and it is awesome.  The satin sheath is going to be a shape that will always be in style; D&G has an impeccable fit for dresses that fall into the category of look at me and the color is gorgeous.  Please, do it for both of us.

This tyle skirt has been on every Kardashian in the country, and it makes sense: it is designed to highlight curves whether they exist or not.  This is not a classic skirt and you will not always love it, and unless your job is to be a Kardashian impersonator you cannot wear it to work.  You will not pay retail for the Sculptors Draped Skirt by Elizabeth & James.
I would love to know what will you try out – on sale?

P.s.Did you know that the Nordstrom Rack is also online?  Score one for savvy shoppers!

Posted in Budget, Her Closet, Shopping