Everything in Black and White

The other day I was searching for a striped dress.  High and low I spotted candy colored stripes, perfect clean black stripes, pin thin stripes, and then I spotted this:

This is not your normal striped dress; in fact it says so in the name.  I found it so lovely, inspired and really rather eye-catching.  It takes a traditional shape, the blouson wrap dress, and traditional concept, the stripe, and really turns it on its head.

Which got me thinking, when we see things in black and white it is often in two ways: clean, stark, well organized and pinned back, or messy, organic, dramatic and sometimes traumatic.

Do you see things in Black and White, or in many shades of gray?  And when you do is it straight and standard or a bit more wild?

Yesterday, Hollywood star, human rights activists and beauty legend Elizabeth Taylor passed away.  I have to admit, I have only ever seen one of her films, Cat on a Hot Tin Roof.  However, I think her beauty, her marriages and her grand glamour have become the things of legends – so much so, that people “knew” her without ever really knowing her.

Taylor’s most standout beauty feature were her eyes, often called lavender or violet eyes they sparkles and seem to be the centerpieces for all of her beauty photographs.  In a very Old Hollywood way, before colored contacts, fake tanning and botox, a young Taylor was lovely with lavender eyes.
To bring a little bit of that color into your own life, and just in time for Spring, here are some favorites: 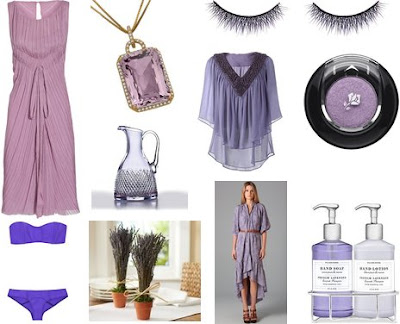 Lovely Lavender from L – R:  Plissé silk-chiffon dress by Alberta Ferretti at the Outnet; Brian Danielle Pink Amethyst Pendant Necklace at Max & Chloe;  Lavender Bloom False Eyelashes by Shu Uemura; Waterford “Alana Prestige” Pitcher at Bloomingdale’s; Sweet Lavender Silk Top by Catherine Malandrino; Color Design by Lancome; Natalie bandeau bikini by Lisa Marie Fernandez at the Outnet; Dried Lavender in Clay Pot at Pottery Barn; Barbet Long Dress by Odylyne at Shopbop; Williams Sonoma Essential Oils French Lavender at Williams Sonoma
May we all have a reason, even if it is a rainy Thursday, to be glamorous – just like Liz.

Posted in Fashion Inspiration, Her Closet

Inspiration comes from so many places: the people you meet, art, life and yes, the places you go (or dream of going).

One of my favorite trips to date was to Jackson Hole, Wyoming.  Talk about big sky, fresh air, and slower living, that is Jackson.  The downtown is quaint and cute, the food is fresh and real, the air is crisp and everywhere you turn there is a scenic photo waiting to be taken. 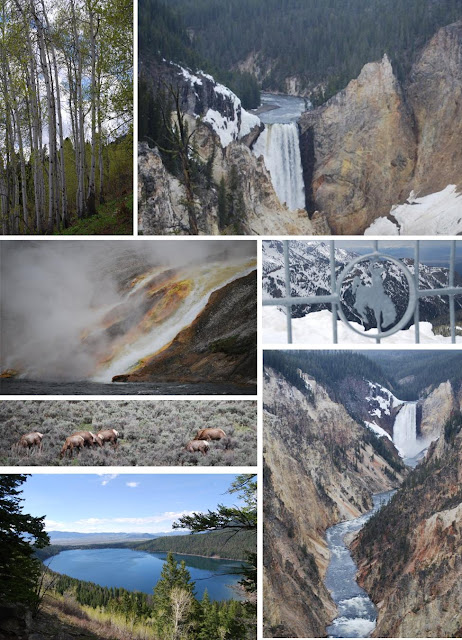 In designing this inspiration board and the matching Wyoming wardrobe I looked for colors that were natural the environment and pieces that were wearable and utilitarian (while still being refined and dare I say, cute)! 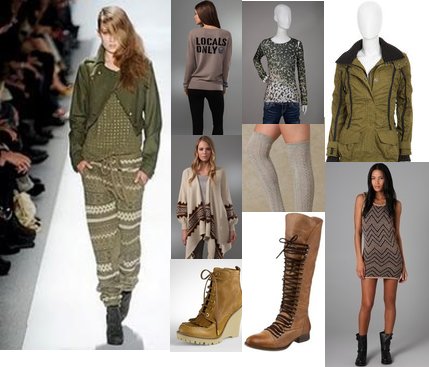 I raved about Sarah Hyland’s youthful twist on orange (cute pun!) and the strapless gown from Nicole Miller does the trick for $355
Loved Natalie’s chic mom-to-be white gown.  This look is easily recreated with the Vanilla Strapless Gown from Laundry by Shelli Segal and the addition of some sparkly pins and brooches.
Lea Michelle and Tina Fey’s straight from the runway Oscar de la Renta were a little difficult to recreate on a budget but I think we’re pretty close with a gold infused Sue Wong gown ($488) and the Nika gown (for a budget busting $788).
My favorite, in the category of “I would rock this anytime” was Julie Bowen’s pantsuit jumper.  She admitted it was risky, but she neglected to mention it would be a cinch to recreate.  Halter jumpsuit from TopShop ($90) and sparkly pins and you’re red carpet, or disco ready.
Shop Happy!

When I was doing my pre-Golden Globes fashion predictions I started to notice a trend from the Pre-Fall 2011 Runways; they were luxe, they were golden, they were Egyptian.

My rule for trend-spotting is three times, by three designers it’s a trend.  The evidence, please:
This look is easy to achieve without looking costume-party ready by shopping shapes and colors for the clothing, and jewels and more specific accents for jewelry, shoes and accessories.  Besides, this is as good of an excuse as any to wear a turban…
http://widget.shopstyle.com/widget?pid=uid8201-47851-90&look=2583125&width=3&height=1&layouttype=0&border=0&footer=0
More Tory Burch…

Posted in Fashion Inspiration, Her Closet

In fashion there are always archetypes and icons.  The women who stand out for having that certain look – whatever it may be.  Their personal style becomes the trend and something to model.  Certain women stand out as setting trends and just following them, and over the next few weeks I’ll highlight their style – and how to be inspired by it, without looking like you’re wearing a costume, Halloween hasn’t started – yet!

We’ll start with the beginning, Jacqueline Kennedy Onassis.  I don’t think it is an overstatement to say she is the most iconic woman of the 20th Century.  In my mind there are two versions of Jackie style: White House and New York.  These different phases of her life clearly informed what was necessary and appropriate to wear but what is most striking is that no matter what she is wearing she always looks like herself, she looks effortlessly refined, authentic and American.

After the White House she maintained the style and elegance she always had but in a more casual, accessible way and defined what today is called American sportswear.

“No one else looked like her, spoke like her, wrote like her, or was so original in the way she did things. No one we knew ever had a better sense of self.”
– Teddy Kennedy on Jackie Kennedy Onassis.