This past weekend there was a “Super Moon” – the moon was 17,000 feet closer to Earth than it normally is, so it looked that much larger than normal. Sometimes the moon makes you do crazy things, this is one of those times. 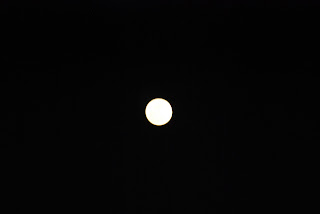 (The picture, though a great study in contrast, does not fairly portray how big the moon really looked.)
On Saturday, we went with friends to Haine’s Point, the spot where DC’s two rivers meet and it must have been the full moon because we were inspired to try some new food choices, far beyond our normal menu selections.
First stop: Capitol Hill for DC-3, an aviation inspired, boutique hot dog restaurant from the guys that brought Matchbox to DC.  Each dog is inspired by a different location, the Cincinnati, West Virginia, or mine the Californian (no hot dog, just falafel and avocado).
To be fair, hot dogs really should be eaten on the spot, either steps away from the grill or still within smelling distance of a street vendor.  Our hot dogs had to travel a little bit, so by the time we dug in, the bun had lost some of its bounce and the toppings melded together.  I wouldn’t recommend these for on the road food, but if I did go back, I would definitely indulge again in their fried pickles; the thick cut pickle coins were battered and fried and delicious.
Post moon viewing we looked at each other and wondered, “So, what’s for dessert?”  Never mind that between four people, six hot dogs, two orders or fries and a order of pickles had already been devoured, we were on the hunt for something sweet.
Perhaps it was the thrill of the moon, or the allure of sugar and butter, our next stop was Dangerously Delicious Pies in the H Street, NE.  Dangerously Delicious is a Baltimore import, and while pie seems homey, this is by all accounts homestyle pie with a bad-ass baker attitude.  No gingham, or girly cake plates here, we’re talking pies and skulls and cross bones, and rock and roll.
Between the four of us we ordered, and shared the cherry pie (very tart), the mixed berry (perfect sweetness and bite), the chocolate chess and the Baltimore Bomb.
Baltimore Bomb is evidently a local specialty and has been highlighted on the Food Network’s “Best Thing I Ever Ate” as a favorite of the Ace of Cakes, Duff Goldman.  The cake is a custard cake with Baltimore’s local Berger’s cookies “melted” on top.  It tastes like melted, ooey, gooey cookie dough – which is to say, pretty out of this world.  It is worth sharing with a friend.  While it was definitely a treat, I think if we went back that is what I would order again – I can bake a mean pie myself, so I like to try things that I don’t have the recipe for and that are, well, the bomb.

So, while normally I’m talking oatmeal, whole wheat flour and root vegetables, this weekend was one to indulge in and we took some time to howl at the moon, and quiet the growl of our stomachs.