I’m a gloss girl.  Call me “chicken” for avoiding the chic stain of merlot, but to finish off the makeup and food analogy, chicken and red wine aren’t really a perfect match anyway.

I’ve thought about trying it, going all Snow White with my makeup inspiration, but would it work?

Let’s turn to the beautiful Margot Robbie for guidance…  Exhibit A, Vanity Fair Red Carpet and Exhibit B, Academy Awards Red Carpet.  Same night, same hair, same clothing color.  Striking on the right, for sure, but I think she’s radiant on the left. 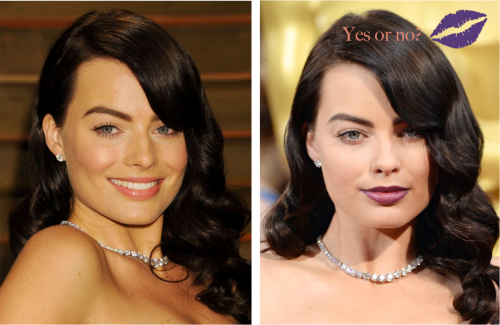 What do you think?  And, more importantly, would you kiss this trend?

Posted in Her Closet, Red Carpet

Last night was the 84th Academy Awards.  I have a few take away notes after teh 3+ hour telecast: the show, like Oscar, felt pretty old; plastic surgery, especially on a man (I’m talking to you, Billy) rarely works; the “used to be fat” jokes for Jonah Hill feel really mean-spirited and cheap; and one montage is usually enough, I counted 4-5.

Now, on to the important stuff, the Red Carpet.

I have to say, I didn’t have an out and out favorite.  Some looks were pleasant surprises, and other were slightly disappointing.  But there were no show stoppers, or major risk takers on last night’s carpet. 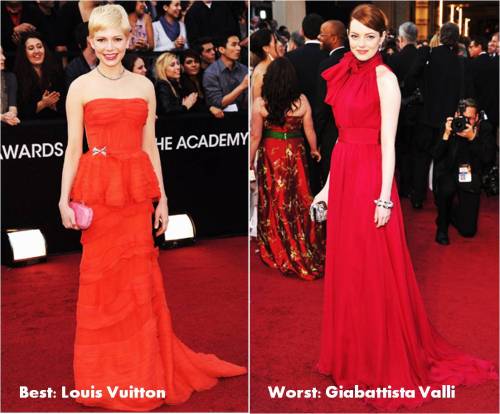 Michelle Williams has the ingenue look down, and this night was no different.  In any other awards season Emma Stone wouldn’t have ended up on the worst dressed list, however, this style is so similar to the Gucci dress that has been worn to death it didn’t feel fresh or fun for this major event. 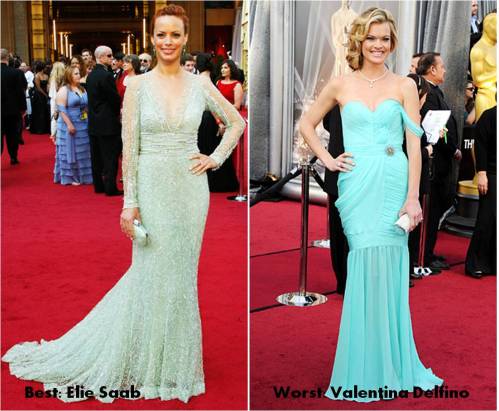 Berenice Bejo and Missi Pyle both wore a springtime hue of mint.  Berenice looks lovely, ethereal, and like a star.  Missi looks kind of messy.

Cameron Diaz and Kristin Wiig both wore gowns with a fitted bodice and tiered delicate skirts.  However, in this showdown Diaz gets Oscar gold.  If I had a favorite dress of the night, it was this peachy nude Gucci gown with cascading skirt and beaded details.

Best in a Cinch:

This one is hard for me to do, as you know I do love Jennifer Lopez.  However, on the Red Carpet and during the show her beaded and sheer Zuhair Murad gown read more Vegas glam than Hollywood glam.  I thought Octavia Spencer looked lovely, regal and glamorous on her big night.

Which dresses were your favorite?  Tell me in the comments!

Posted in Her Closet, Red Carpet