Halloween is Full of Surprises

Four Years Ago Today I met Mark.  Let me tell you how we got there.

In high school my fall midterms always conveniently fell right on Halloween, so my teenage Halloweens were spent at the dining table in my parent’s house with text books and loose leaf paper.
Then I went to college.
I was very lucky to be matched (fate has a weird way of finding you the right roommates) with girls who would plan, and seek out the most perfect Halloween/Holiday/Tuesday night.  Freshman year we were all still getting our footing and typically went out in a pack of 8+ girls, so the costumes were a bit “home sewn” as Tim Gunn might say.  That year I was a flapper, with a top from Loehmann’s, a skirt borrowed from a girl on dorm floor, and a boa that I was magnetically pulled towards.
Sophomore year I was home for a wedding, no costume, but a great dress none the less.
Junior year.  This is is where it really begins.  There were just the four of us (Jaci, Cara, Liz) and we decided we’d make more impact together than we would apart.  We all had our own motives for a Halloween costume; and I won’t out anyone else, but I personally set out to look cute in a costume, the scary and funny is not for me.
We bought this:
We made this:
You can’t tell but those jumpsuits were taken apart, taken in, and hemmed into very chic Halloween Couture dresses.
It’s Senior Year.  Time to go out strong.  We all four live together for the first time.  We have become more than just roommates and friends, we became a troupe.
We went out for a bar crawl starting at Ozio, a bar I had never been to before and have only since been back during my bachelorette party).
And that’s where I met Mark.  I was with my best friends, in costume, in a bar that I would never normally go to.  He was with his best friend, in costume, in a bar that he had never been to before. I think looking back we were both a bit anti-Halloween that year.  I definitely put up a fight on the costume, and the plans.  But, again, fate has a funny way of making the right matches.
I asked him what he was supposed to be.  (He looked like Tony Montana (Scarface) but was actually dressed as Pablo Eskobar, if you do a little research you’ll see the costume is fairly universal.)  He asked me if I was dressed as Winnie Cooper (Wonder Years).
I told him I was a “rock star” – and that was the “hook”.   He left his friends and joined our party and that night we changed numbers, shared dances and shared a kiss.
Since then we have dressed up as the Dukes of Hazzard and Olympians, (last year we were in South Beach for wedding planning). 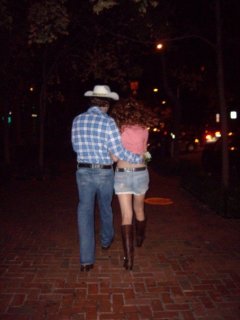 I am lucky for friends who pushed me to embrace the night, and I am very lucky for a partner, best friend and husband who pushes me to embrace everything in life.
I hope your Halloween provides as many treats as mine did, and continues to do.
Happy Halloween and Happy Anniversary to my Husband, I love you.

This entry was posted in Family, Her Inspiration, Life Lessons, Mark, Personal and tagged bar crawl, dating, Halloween, how I met my husband. Bookmark the permalink.